It's been a couple of days, so I thought I'd try and make sense of the fallout after Thought Bubble Festival. The actual write up is on our collective blog: wearewordsandpictures.com, but I thought I'd add my ten pennies too.

So. It was both an utterly terrifying and wonderful experience. The people were great. The stuff that was on sale was really amazing. I felt so out of my depth it hurt my brain, but also so, so welcomed by a group of amazingly talented and awesome people, whose names I will be plastering all over this post in just a minute.

The table itself on the day went really well. We sold all the copies of our zine, and the prints we'd taken along of the cover. I've never sold a piece of artwork in my life before now and was utterly convinced that my contributions to our little project were not enough and just going to let the side down. I have to admit I doubted Matt and Julia's sanity on letting me in on this thing. But seeing those books leave the table left me with a feeling in the back of my brain that I can't quite put into words yet. It's changed things for the better ... made me want to do more.

Of course after that I managed to get stupidly drunk. That was hilarious (from my point of view at least) but I do apologise for acting like a complete twat. I'm only an occasional drinker and a complete lightweight, with a tendency to climb buildings, get very loud and theatrical, molest statues and generally be a bit of a prick when I do get beered-up. The upshot of this is I dance and am less shy than usual (to say the least). The downside is I usually manage to say something idiotic and want to hide under a rock for days afterwards and think the world has come to an end. Uhm. Yes.

As I said up there somewhere one of the best things about this was I got to meet some really amazing artists/writers/people who I probably never would have been able to talk to in another context:

John Scrivens
Phil Spence
Marc Ellerby
Kieron Gillen (we never did get the high-fiving right. Something to work on)
Will Kirby
Ben Powis
Adam Cadwell (thanks for helping me with my tights, by the way. And sorry for yelling at you in the street. I was just being hungover/friendly I swear.)
Lizz Lunney
Liz Greenfield
Matthew Kitchen

I know there are more of you, dammit. Clare, Jake and Jake. Shug Comics guy whose name has escaped me (I know, I'm crap). Other people I waffled at too. It was all jolly good fun and you're all just so great. I look forward to more hand-clapping with you all at some point soon.

Also, the bag I bought off of John Allison (of scary go round fame) has nominated itself to be my reading book bag from now on. It's just the right size for novels and such, and too nice to hulk around my sketchbooks in. Yay for bookbags. 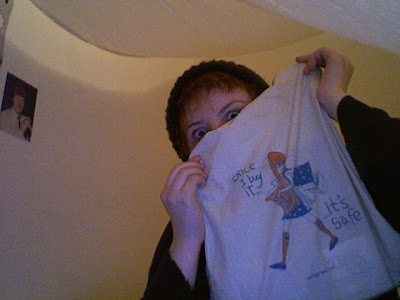 I think that just about concludes it. Megabus was nasty on the way back. College has hit with me with a bump and I am scrabbling to catch up with everything now. My wisdom teeth are starting to ache and I have essays about science-and-art things to write about. I will plug in the scanner and flood this place with sketch stuff at some point this week.

Anywho. Enough of this incoherent babble; I am off to get some sleep.

Having a Scarily Alcoholic Cocktail* in hand seems like as good an excuse as any to update my blog.

You probably won't know (unless we have spoken directly and you are either my housemate or another member of a select group of people that I whiffle to about various things) that on November 15th, I will be in Leeds at Thought Bubble Festival, plugging a small publication that my associates Julia Scheele and Mat Sheret (we are words and pictures, but see my sidebar for their personal blogs 'devil makes comics for idle thumbs' and 'the polaroid press') have put together, with a guest appearance from me, in the form of a shiny cover, and a couple of brain farts in between things. Lovely.

Here's a little look at the cover art: 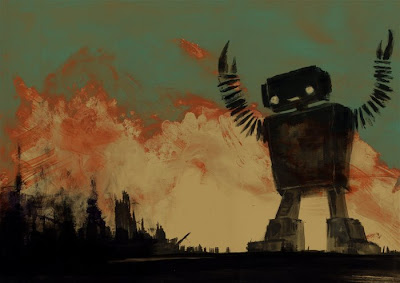 And if that's not enough incentive to come along and visit us, here is a picture of my ex-marmot surrounded by balloons. He wants you to come. You can see it in his eyes. 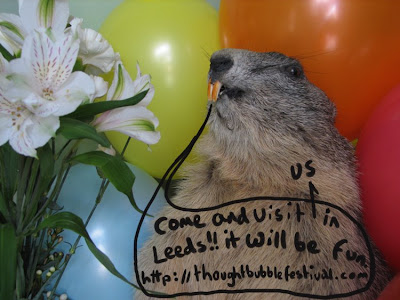 How can you resist?


And that's just about that tonight. More stuff soon.


*The Scarily Alcoholic Cocktail - a White Russian as it happens (we had milk and vodka and very little else in the house that could be inbibed) - is the result of a rather shite evening where, among other things, I've managed to break my beloved graphire tablet. It was on its last legs anyway, but it's completely buggered now and I don't think I can afford to replace it. What an arse. And to make things more fun I'm getting a delightful insta-headache from the vodka and milk mix I'm furring my arteries with.
Posted by Sarah Gordon at 00:39 No comments: