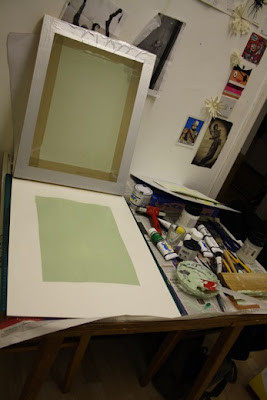 Right. Some observations from this evening's dicking about with paints and this screen printing kit thing: it's crude. Like, really really crude. Super fucking unbelievably crude and probably enough to turn most people off home screen printing for good. Wow.

However, I have some ideas on how to make it work which I will be trying out tomorrow:

- better paper as the cartridge I am using isn't really taking the acrylic very well ... something more absorbent might be better. Maybe I'll ask the technicians tomorrow morning and explain my predicament (I am trying to avoid using the college screen beds because I, er, have missed all the inductions and don't really want to ask the nice people who run the print studios to put themselves out on account of my poor organisation. I can screen no problem, I just haven't exposed an image in a long time and don't really want to fuck up and inconvenience everyone on account of my own ignorance. Harumph.)
- masking tape to guard against splurges
- a clamp of some sort to secure the frame in place. Actually this is a good point - the contact between mesh frame and the paper is kind of crap. If I can do something about that then I should have much better results
- practice

Other than that, been exploring a bit of colour theory today. Horniman Museum's natural history room is filled with these brilliant dark wood cabinets with these backing boards of various different sombre, institutional colours (greens, ochres, salmony pinks) which remind me of some of the particularly fusty corners of my old school. I can almost smell the boredom. I'm hoping that using these colours as a sort of theme for my homonym's project, I'll be able to tie the set together a little. I could use any colours to do that, but these are particularly appropriate. I like me some context.

Is it really wrong that I like institution green? I hate to think what that says about me as a person. It's just a funny colour. Supposedly calming, but probably just boring for a lot of people. I like it because it makes me think of the way chalk smells. I sort of want to look further into the roots of these colours and why they were used in educational contexts (and why they often aren't now ... does it really make a difference or is it just a question of fashion?) long after we left the Victorian era.

I am not going to learn anything else this evening. I should really go to sleep. More lithography tomorrow.
Posted by Sarah Gordon at 23:09