Hello. It's 19 days past 2011 and I've been busy. Mostly with adminnish things, but I've also nearly completed a little comic about satan pissing off his minions, and thought I'd pop some of the line art up here in case you lot happen to be interested: 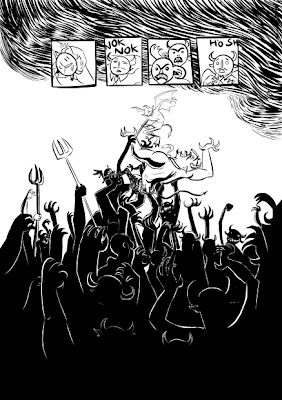 It's short and not particularly sweet, but you should be able to pick it up from February onwards. Info on that once it's all sorted and junk.

Just for laughs I thought I'd play about with colours on it too. Here's a panel that - if I were feeling more pretentious - I would say was inspired by the artistic stylings of Hieronymus Bosch, but I don't do that sort of thing so I'll say it was influenced by Sally Cruikshank instead:

So that's likely to be the first thing in print from me this year. There's a couple of other things cooking in my brain which I'd like to start posting development work from in the near future alongside collaborative stuff like The Peckham Invalids or anthology work (more information about that sort of thing as it happens).

In general, I'd like 2012 to be a year where I stop hiding all my personal/story work in my head, notebooks and sketchbooks and get it out onto this blog/tumblr/twitter/deviantart/the internet . Being secretive and shy about this stuff is for the weak and feeble. I, on the other hand, am strong like ox.

So yes. More activity in general. You have been warned.
Posted by Sarah Gordon at 13:29