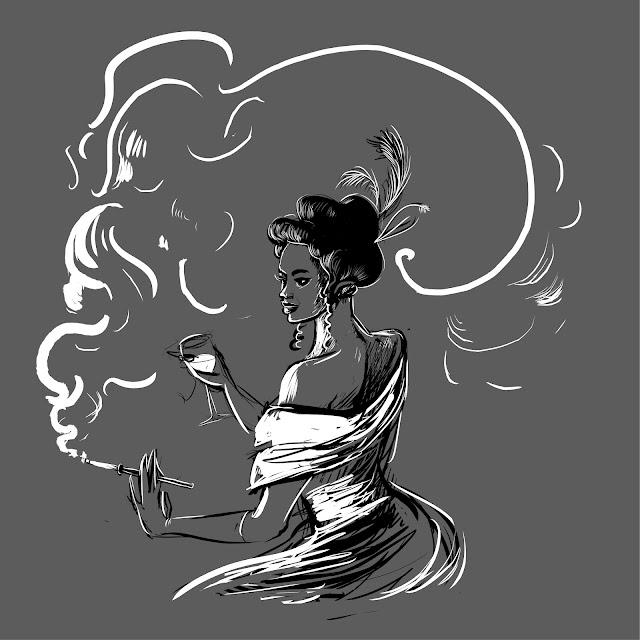 Posted by Sarah Gordon at 23:54 No comments:

... is absolutely beautiful and brilliant. Not too much structure to this post. Basically I did a lot of exploring this weekend and here are some of the wicked things I have found: 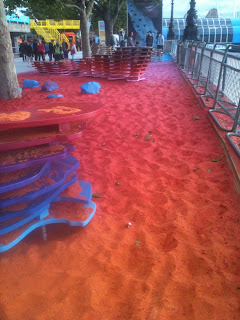 There is a multi-colour city beach on the South Bank this year! I'm guessing it was installed pretty recently as the sand hasn't got too churned up yet, but I can't wait to see how the colours mix over the summer. 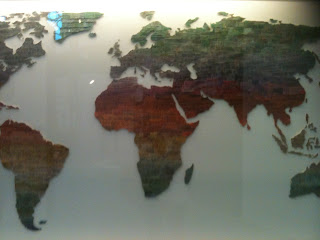 There is a fantastic exhibition on at the London transport Museum called 'Mind the Map'. Fairly obvious, it's an exhibition about maps, and there are some absolute corkers. Loved this one ... a map of the world made from train tickets. 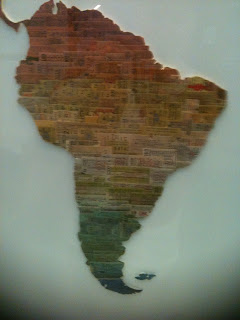 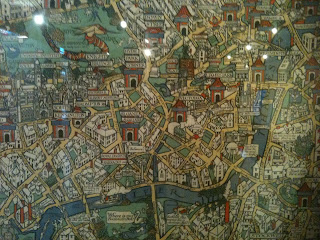 And this one, which is a gorgeous version of London from around the turn of the last century, I love the way this particular map is emotionally distorted and gives HUGE priority to areas like Hyde Park, whilst virtually eclipsing Charing Cross Road, a road that looms heavily in my own imagination. ALSO, South London is absolutely enormous on this map. Most modern takes on central London don't give Old Kent Road a look in. 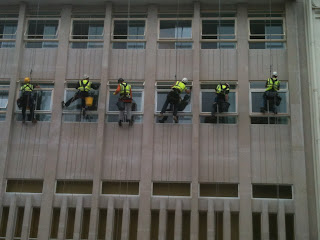 Spotted some synchronised window-washing taking place near Kensington Gore on the way up to take a quick look at the RCA summer show. 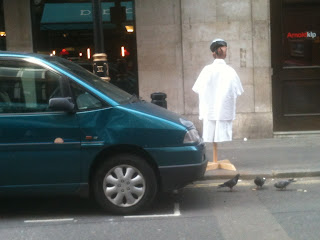 A mannequin just hanging out in Soho with a bike helmet and some summer shorts on. 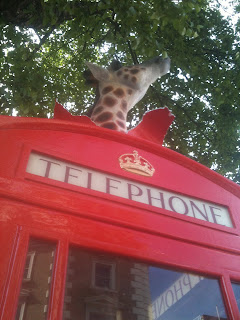 One of the many Childline telephone boxes dotted around the centre. There are some absolute doozies out there, including Lauren O'Farrell's Bright yellow, googly-eyed piece of genius on Trafalgar Square. This is my personal favourite though.Got a bit of a thing for giraffes. 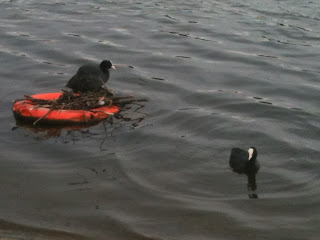 Some cute coots who've made a mobile home out of a decent number of sticks and a stray life ring (one wonders what it's doing in the water in the first place ... did it just blow in or did it fail to save someone? Ooer). You can visit them in Kensington gardens alone with this guy: 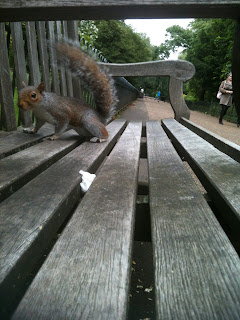 Derpy-looking squirrel who decided it would be hilarious to jump on my leg and try to stare me out. Squirrels are great. They look permanently petrified of everything.Really know how to squawk too.

Anyway. I think the point I am trying to get across is that there is a hell of a lot happening out there at the moment which I am finding very exciting. This is such a great city and one that I sometimes take for granted or stop noticing because I am too busy being self-absorbed, feeling grouchy about something nondescript or ruining my eyes in front of a computer screen and scratching away with my graphics tablet. Sorry London, you are amazing and I shall do my best to pay attention and from now on will document your efforts to be awesome as  best I can.

Posted by Sarah Gordon at 23:45 No comments: 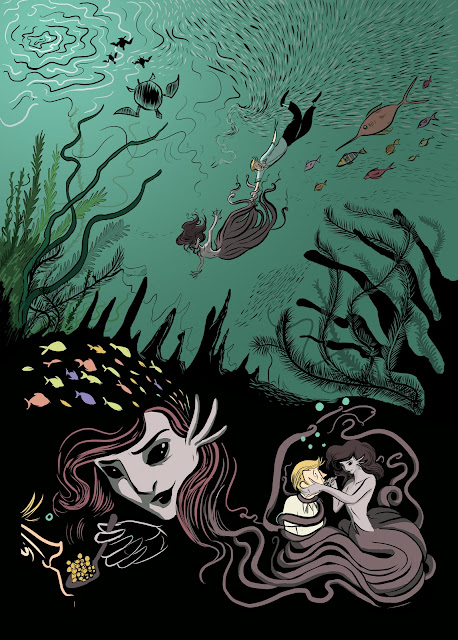 A naughty Cilophyte dragging a hungry man down into the depths of his soup bowl.
Posted by Sarah Gordon at 15:34 No comments: 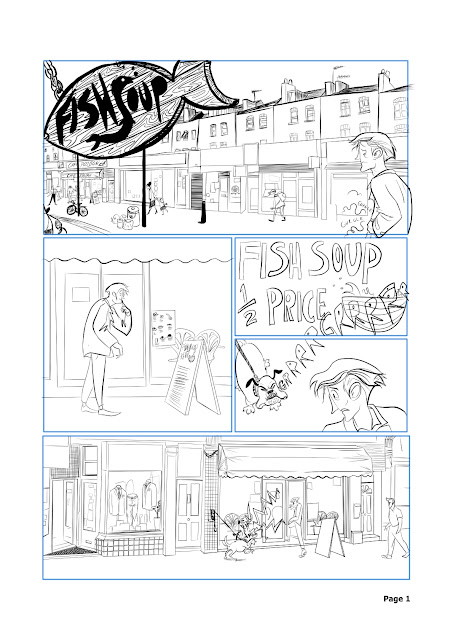 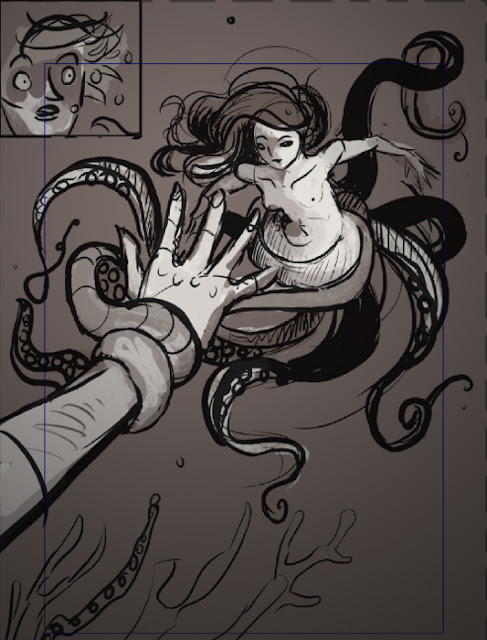 Sneak peek WIP preview thingy of my standalone short for Ink + Paper. Putting a bit more pattern and stuff into my linework than usual on this one, as I want the colour to be fairly simple.

More about this when the anthology's out!
Posted by Sarah Gordon at 17:36 No comments:

Hello. Against my better judgement, I'm about to overshare quite a lot here. But there seems to be a lot of chatter about female body hair right now.

I am a girl, as well as the artist and co-creator on what is essentially a feminist comic about an all-girl super group, and as such I often (among other things) think about the way girls look, how they are "supposed" to look, how they actually look, and how they might look if they didn't feel like anyone was watching or judging them.

Anyway. Little known fact: I haven't shaved my legs in well over a year. My pits are pretty fuzzy too, but we'll leave them out of this for now.

To be honest, my relationship with razor blades has always been distant at best. Being fair-skinned means my dermal layers are kind of sensitive, and shaving usually just leaves me itchy, razor burned and cursing myself for being female and therefore apparently obliged to shave large areas of my body. Still, up until recently I've always done a token shave if I've ever had to get my legs out in public (very rarely and always avoided if at all possible), or if there is some prospect of, um, sex on the horizon (rare, but it has been known to occur).

Here's a couple of pictures of my hairy legs so you can see what I am on about:
So how did it come to this? Nutshell: I broke up with my long-term boyfriend about fourteen months ago. Fell out of the habit of shaving because, frankly, the prospect of canoodling with anyone seemed alien and unwelcome. As I was settling in for some heavy singledom I didn't really see the point in that sort of limb maintenance. I was also far too busy with work and drinking with my mates to be bothered about silly things like body hair. I mean, come on. Seriously. What would you rather be doing? Drawing, making up stories and partying with fun people or taking an evening off to shave your body hair off? Dour.

Of course that eventually wore off and I started wanting to get naked with people again, but I'd sort of come to the conclusion after a few months of solitude that I'd rather meet someone who liked me for me, rather than making myself cookie-cutter "sexy" and worrying about how I looked and so on. So the leg hair stayed. Yeah, so it got some raised eyebrows. Not as many as you would think though, and the rather wonderful man I am now shacked-up with took it to be something of a positive (not so much on the aesthetic side of things ... he tells me he's fairly neutral on that ... more how it reflects on me as a person or something ... personally I'm just pleased he doesn't care).

Thing is, being hairy around someone else who loves you isn't really such a big deal. I think most girls have had times where they just can't be arsed with shaving and (big surprise) it turns out their boyfriend couldn't care less. No. The big test, in my opinion, is getting those furry muthas out in public. At least for me. In fact, it turns out I am more scared of the judgement of other women than I am of any bloke. Obviously it was time to sort that out, so here is a picture of my pale, hairy leg sitting on a wall in Venice last week, where I spent the entire holiday in shorts; a garment I have avoided wearing like the freaking PLAGUE since I was about 14.

So yeah. That happened. Turns out no one really cared. It really wasn't as scary as I thought it was going to be and since then I've been wandering around London quite happily in varying lengths of skirt, shorts and whatnot. I think I have officially broken the giving-a-shit barrier.


Is it some kind of hardcore feminist statement I am trying to make here? Well, no. Not exactly. I don't have a problem with other girls shaving their legs, each to their own and all that. My argument for being fuzzy - and I've kind of shot myself in the foot here for writing about it at all (sort of defeats the point) - is twofold:

1. Being comfortable in your own skin and accepting yourself as yourself rather than bending to how other people think you ought to be is very important. For me that involves not having painful, itchy legs (among other things, of course).

2. Not thinking about this sort of stuff leaves me more room to do and think other things. My spare time is precious, and this way I've freed up an extra hour or so a month (possibly more) to learn how to play chess, learn (some) Mandarin and read books about the possibility of intelligent alien life. Okay, so it's not a huge amount of time, but if you also take into account all the time I used to waste worrying about how other people see me that I've managed to regain ... well, I guess I'm just able to focus a lot more on what I want to do rather than what I feel I should be doing.


So my story for The Peckham Invalids is out! Very pleased with this one, so I thought I'd share some pictures with you: 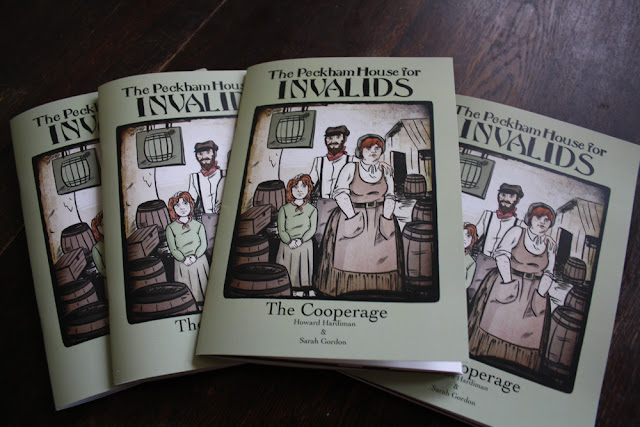 Julia's lovely cover so you can recognise the thing if you ever see it lurking somewhere suspicious. 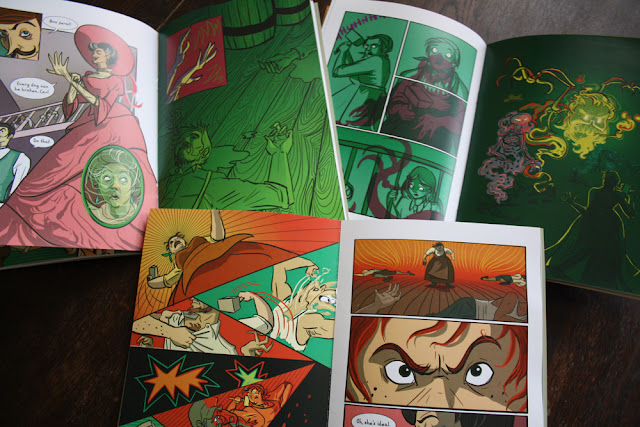 Here's a sneak peek at the insides of this one. As you can see, this episode involves both 'spooky things' and 'fighty things'. Not necessarily in that order. 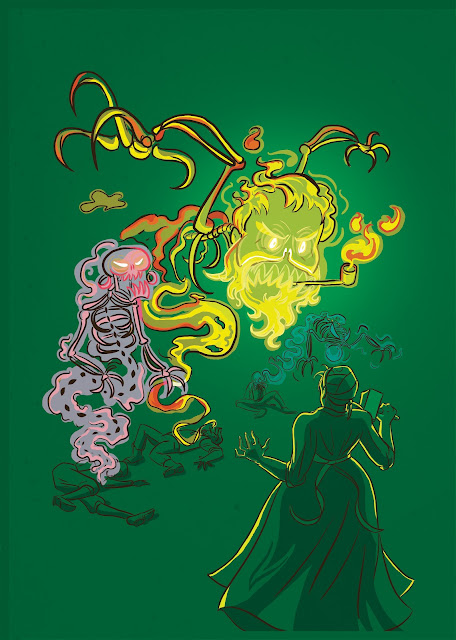 It also also involves a ghost with a pipe at one point. Like any self-respecting comic ought to. Mind you, there's more to it than that. This issue introduces a bit of Emily Downing's backstory and family life, but also reveals a bit more about two of the arch bad guys, Myrtle Morrison (a formidable medium) and Carl Foxleigh (a hypnotist of many talents).
We've only had a run of 100 of this issue printed, with a plan to possibly print more at some point in the future. You can grab a copy of it over at Howard's shop - Cute But Sad. As I think I've mentioned many times before the rest of his work is also well worth checking out if you haven't already.
Posted by Sarah Gordon at 15:04 No comments: